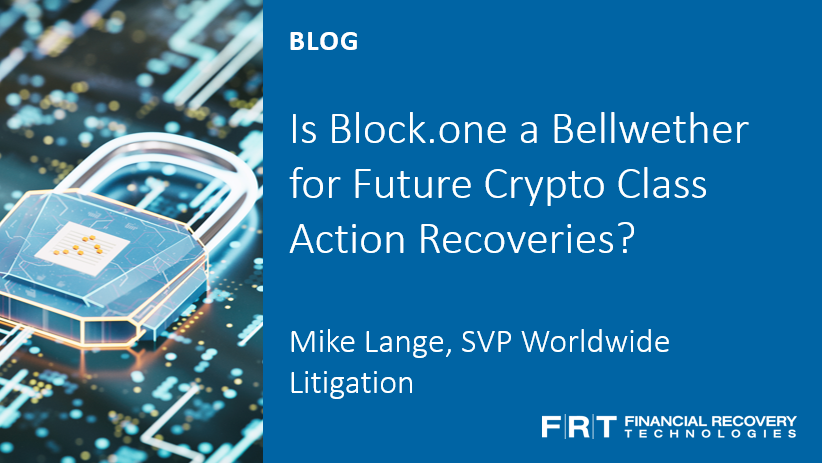 Is Block.one a Bellwether for Future Crypto Class Action Recoveries?

Earlier this month, speaking at a security forum, SEC Chairman Gary Gensler said crypto assets need more regulation given the potential for “fraud, scams, and abuse in certain applications.”[1] The agency has asked Congress for broader powers over, among other things, digital tokens and the platforms on which they trade. The SEC enforcement proceedings and securities class action settlement against Block.one re-enforce this need. Given the limited recovery,[2] we hope this matter is not a bellwether for future recovery efforts in this area.

Background
Founded in 2016, Block.one is a Cayman Islands-registered company with offices in Hong Kong and Virginia. It developed EOSIO software, an operating system for related blockchains. From June 26, 2017 to June 1, 2018, the company conducted an “initial coin offering” (ICO) in which it publicly offered and sold 900 million ERC-20 Tokens (digital assets) in exchange for Ether, another digital asset. Funds were raised to develop its software and promote the launch of blockchains.

Unregistered Securities
Selling at an average price of $4.40 per token, the ICO raised the equivalent of several billion dollars. According to the SEC complaint, “[a]t the close of the ICO, approximately 330,690 individual wallet addresses held the ERC-20 Tokens, with approximately 75% of all tokens held by 100 wallets.”[3] Some were sold to US residents – many were presumably not. Block.one did not register its tokens under the federal or state securities laws, and it did not qualify for an exemption from registration.

The ICO started shortly before the SEC issued an advisory opinion that such tokens were unregistered securities and continued for almost a year thereafter.[4] It should have been clear for most of the offering period that tokens needed to be registered but were not. They were being distributed over platforms that were not registered exchanges and did not qualify for exemptions.

Settlement against Block.one
Block.one reserved for itself 100 million founder tokens. At $4.40 each, these were worth $400M+. The SEC fined the company $24M and the securities class action recovered $25M. So, in the end, Block.one has paid $49M, about 12% of the value of its founder tokens and just 1.4% of proceeds raised in the ICO.

Admittedly, both proceedings involved challenges that could have precluded recovery. Block.one consented to the SEC order without admitting or denying the agency’s findings. In negotiating the penalty, it cited mitigating factors including its attempts to prevent purchases by US investors, the limited duration of its ICO, and management changes and compliance efforts taken later to prevent future violations. The class action settlement was also negotiated without an admission of liability. It occurred before the court ruled on the company’s motion to dismiss the complaint as insufficient. Plaintiffs could have lost that motion and if claims survived, with many tokens presumably sold to investors outside the US, there could have been jurisdiction and class certification challenges.

But there’s no getting around the fact that in the end, Block.one paid a very small price for its misconduct and investors will end up with little: nothing from the SEC penalty and significantly less than $25M after attorney fees and case costs.[5] We must hope for greater SEC enforcement powers and better outcomes for investors from the other crypto-related suits.

[1] https://www.cnbc.com/2021/08/03/what-the-sec-chairs-comments-on-crypto-mean-for-a-possible-bitcoin-etf.html
[2] According to the Settlement Notice: “Based on Lead Plaintiff’s estimate of the number of ERC-20 Tokens and/or EOS Tokens eligible to recover under the Settlement, the average distribution per share under the Plan of Allocation is approximately $0.072 per EOS Token or ERC-20 token before deduction of any taxes on the income earned on the Settlement Amount, Notice and Administration Costs, and the attorneys’ fees and expenses as determined by the Court.”
[3] https://www.sec.gov/litigation/admin/2019/33-10714.pdf
[4] https://www.sec.gov/litigation/investreport/34-81207.pdf
[5] From the Gross Settlement Fund, Lead Counsel will seek an award of attorneys’ fees not to exceed 25%, or $6,875,000, plus reimbursement for litigation costs not to exceed $300,000. Lead Plaintiff may also seek reimbursement for its time and expenses not to exceed $5K.

To learn more about how FRT can help your firm navigate the data & filing complexities in Antitrust cases, click here or contact us at learnmore@frtservices.com.

This communication and the content found by following any link herein are being provided to you by Financial Recovery Technologies (FRT) for informational purposes only and do not constitute advice. All material presented herein is believed to be reliable but FRT makes no representation or warranty with respect to this communication or such content and expressly disclaims any implied warranty under law. Opinions expressed in this communication may change without prior notice. Firms should always seek legal and financial advice specific to their unique situation and objectives.