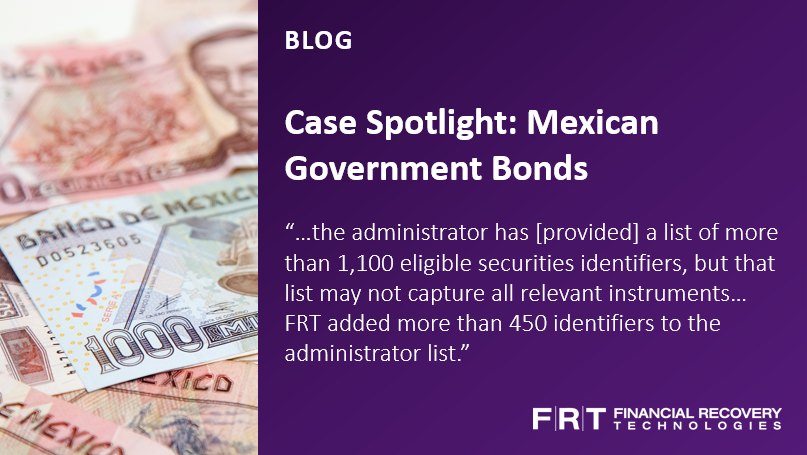 The District Court preliminarily approved a $20.7M partial settlement of federal antitrust and common law claims against Barclays and J.P. Morgan (the “Settling Defendants”). Plaintiffs will continue litigation against the remaining non-settling defendants (the “Non-Settling Defendants”).[1]

Plaintiffs allege that the defendants were the sole market makers for Mexican Government Bonds (“MGBs”) issued by the Mexican government through the Bank of Mexico [2], and that they conspired to manipulate and fix prices in both the primary and secondary markets during the Relevant Period.

Defendants allegedly rigged the MGB primary market by collusive bidding and the sharing of customer information. The bid-rigging allowed them to buy MGBs at artificially low prices and sell the newly-issued MGBs in the secondary market at artificially inflated prices. Plaintiffs allege that defendants improperly communicated prices among themselves, pooled information about expected customer flows, and exchanged confidential bank information to facilitate this scheme. Defendants allegedly widened the bid-ask spread even further when offering to buy or sell MGBs in the secondary market through similar improper communications with each other.

An interesting aspect of this case is that unlike most settlements, the class definition here expressly contemplates expansion.

The current settlement is only a partial one, with the two Settling Defendants. While it’s pending, Plaintiffs will continue litigation against the Non-Settling Defendants, with the cooperation and assistance of the two Settling Defendants. This may (and hopefully will) result in an expansion of the class as discovery unfolds, the scope of the defendants’ abuse becomes clearer, and (hopefully) more defendants settle. If additional defendants settle and the same existing per-defendant recovery ratio applies, this case could result in $100M+ in recoveries before it concludes.

Many antitrust claims are challenging to prepare due to the frequent absence of securities identifiers for impacted instruments and resulting challenges around the identification of relevant trade data. Here, the administrator has made the process easier by providing a list of more than 1100 eligible securities identifiers, but that list may not capture all relevant instruments. As the website notes: “This bond list may not be complete and all-inclusive. If a ISIN does not appear on the list, please independently verify whether your MGB Bond Transaction may still qualify.”

FRT is uniquely positioned to add value for clients by supplementing this list and similar ones in other cases. Here, FRT added more than 450 identifiers to the administrator list.

FRT regularly reviews settlement websites looking for additions to the administrator lists. Administrators often update them without public notice, and if claimants don’t keep on top of additions they could miss out on potential recovery dollars. FRT also researches other identifiers that correspond with the instruments on the administrator lists to ensure more comprehensive data searching and extraction. FRT finds additional eligible identifiers by reviewing the data for the hundreds of clients for whom it files. Finally, FRT clients themselves may notify us of additional identifiers they discover during the process of gathering their data, which FRT then brings to the administrator’s attention for inclusion in the settlement. FRT also ensures claims of other clients include trades in these newly identified instruments. In this way, FRT ensures clients receive every dollar to which they’re entitled.

Investors are eligible if they entered into any purchase, sale, or exchange of Mexican Government Bonds during the Relevant Period, whether in the primary, secondary, or any other market. Losses will be calculated by first grouping the MGBs by the remaining years to maturity from their purchase or sale, then applying a Risk Number – measuring the sensitivity of a bond’s price to changes in the yield – and a Multiplier assigned to that Risk Number. For each claim, the administrator will multiply the notional amount for all the eligible bonds in each group by the corresponding Multiplier to get an Individual Transaction Claim Amount. To calculate the distribution amount, the administrator will then calculate each claimant’s percentage of the Transaction Claim Amounts for all Claimants and apply that percentage to the Net Settlement Fund amount.

Next Steps:
If you are eligible and want to participate in this settlement, you must submit a Claim Form by November 29, 2021. FRT can help you prepare and submit the Claim Form.

[2] MGBs include any debt securities issued by the United Mexican States (“Mexico”) that are Mexican Peso-denominated, including, but not limited to, CETES, BondesD, UDIBONOS, and BONOS.

To learn more about how FRT can help your firm identify and monitor antitrust litigation opportunities, visit our website.