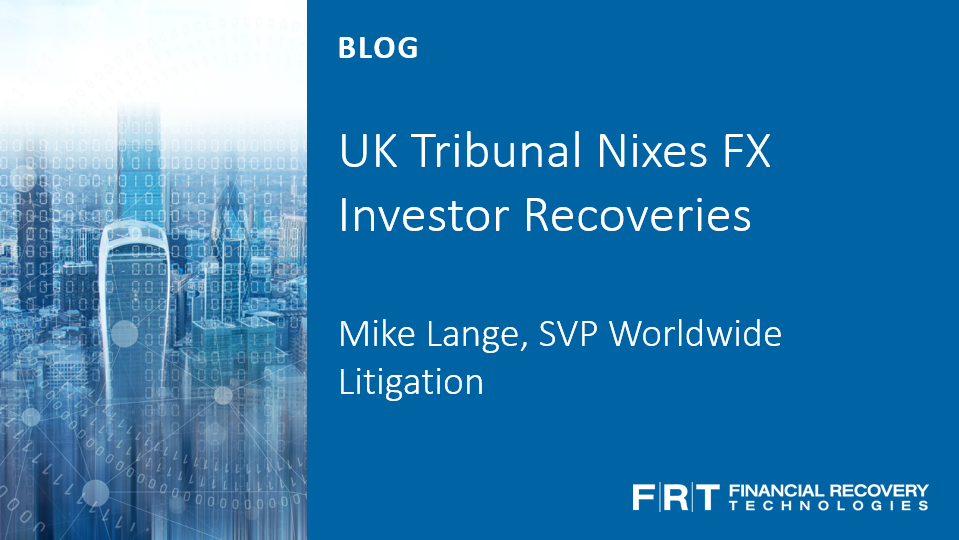 In a setback for global FOREX (FX) investors seeking compensation for losses not covered by the $2B US class action settlement, on March 31, 2022, the UK Competition Appeal Tribunal (CAT) ruled that collective proceedings (i.e. their equivalent to US class actions) could only proceed on an opt-in rather than an opt-out basis. Absent reversal on appeal, this effectively ends the recovery efforts.

Here are six takeaways from the 255-page decision:

Investors have historically shied away from the UK as a venue to pursue compensation for investment losses.  This decision further discourages them, at least for suits involving losses in non-securities instruments.

Our Legal & Research team will continue to monitor this through the appeals court and provide updates accordingly. To learn more about pursuing claims in the Netherlands, contact your FRT representative or email us at learnmore@frtservices.com.

[1]  Several of the largest FX claimants sued the banks directly, but their group is closed to new claimants.  There is a class action in Australia, but it’s limited in scope.

To learn more about how FRT can help your firm maximize recoveries in shareholder class action settlements, contact us at learnmore@frtservices.com.

Founded in 2008, Financial Recovery Technologies (FRT) is the leading technology-based services firm that helps the investment community identify eligibility, file claims and collect funds made available in securities and other class action settlements. Offering the most comprehensive range of claim filing and monitoring services available, we provide best-in-class eligibility analysis, disbursement auditing and client reporting, and deliver the highest level of accuracy, accountability and transparency available. For more information, go to www.frtservices.com.