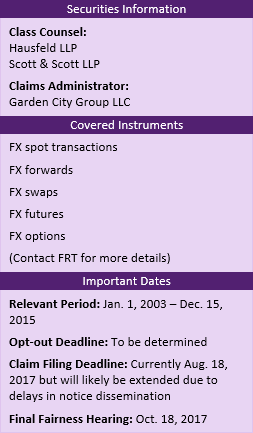 This antitrust class action concerns alleged manipulation of the FX market, the world’s largest and most actively traded financial market. The suit centers on collusion among several major FX dealers to artificially set certain key rates in order to enhance profits and reduce the value of customer FX transactions. Currently, nine defendants have agreed to a pay a total of more than $2 billion to settle claims against them. Several other defendants have yet to settle.

The settlements break down as follows:

The proposed Recognized Loss formula is complex.  As in prior antitrust settlements – most recently, the credit default swap (CDS) matter – the Claims Administrator will use information obtained from the settling defendants and third-party sources to try to construct your eligible transaction details and estimate your losses. During the claims submission process, you can either (a) accept their trade details and estimated loss amount, or (b) submit documentation showing actual transaction volumes based on your own records. Which option you choose will depend on the nature of your trading activity.  If you traded only with the non-settling defendants or on an exchange, you will need to submit your own records as the Claims Administrator will not have access to this information.

For more information on this case or other securities, global, and antitrust class action litigations, please contact Financial Recovery Technologies at info@frtservices.com.